A few months ago, an interesting assignment came. On the occasion of the centenary of Madrid's Plaza Mayor, Photoespaña sought to produce, with the patronage of Samsung, a VR piece for this year's festival.

For this purpose they had Miguel Ángel Tornero, a photographer who even though he had not worked to date with tools - 360 ° VR, yes has an interesting and extensive work which questions among other things the way we have to approach us and consume images in the era Digital, and this from the perspective of everyday life.

Our work would be the advise and perform along with Miguel Ángel VR part. We had several initial meetings so that it was familiar with the language, VR, and us with his work to see the best way of combining the proposed item (plaza mayor), the author's own speech and narrative - 360 ° VR.

There were several ideas, such as becoming the statue of Felipe III, and from this privileged view jump, and wander around the plaza and the city. Also toyed the option of working with the "error" e from forcing the software of stiching (stitched images) to join impossible images. As Miguel Ángel was knowing more technology, arose more ideas and new approaches to tackle the project.

Finally, we opted for an approach that would create an image in the line of work being developed by the author.

The proposal was to shoot in 360 degrees, from one of the busiest points of the square during a whole day. Miguel Ángel, in visits prior to the square had observed how on the front of the statue of Felipe III gathered many tourists. These came became a selfie or taking a picture of the statue and continued. There was a wandering continuous surroundings to an imaginary circle that was repeated over and over again.

From this simple idea; place the camera in the center of the continuous traffic of people, the next step, would lead us, already in the post room, to go by freezing to each and every one of those people who stopped to photograph and be photographed.

With this starting point, and already knowing how wanted to materialize it, just get down to work and roll left us. And it is here when the story is more complicated. Due dates, and the commemorations of the centenary of the plaza, is rare the day that isn't full of scaffolding, stages, facilities, etc. This hinders the creation of a mental image that we have, because it hinders that wandering tourists we had observed.

After several calls and efforts, we can foresee a strip of two to three days in which it seems that the square will be 'clean' elements, and finally on Wednesday, with all permissions requested and granted, we started to roll.

We put the camera, at the point that we had agreed in the previous locations, we lastramos the team so that they will not tip it over and not move, place tape to make it more visible and to avoid that people get too close which would cause us problems in post-production. 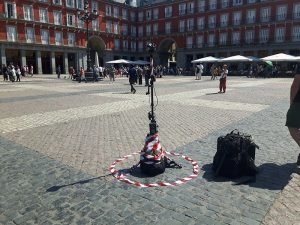 All done, we get to burn, watching from a nearby terrace. When is wheel 360 °, is typical and even comical that moment "out of level", since there are usually few options where to hide from the camera, in this case I believe it was often more comfortable taking a "relaxing cup of coffee with milk in main square" would more be? you could ask?.

Arrival the Sun, picked up our team and return to the producer. After the laborious process of stitching of images, we finally have before us what we had been imagining in the previous days. And more people wandering around and taking picture. Edit the part that seemed most interesting both by the amount of people and the quality of the light: a fragment that corresponds to about two hours of filming between 18:00 and 20:00 h.

These two hours were accelerated to a duration of 2:30 minutes. Then we identified the moments when the characters took pictures and froze them. Finally we assign a piano note depending on the distance to which they are found, the closest characters being the sharpest notes, and the most distant the most serious notes, resulting in this peculiar suite, which in the words of Michelangelo himself : "reflects on the daily use of image as language and democratized photography to the point of becoming an extension of our bodies".

Mapi was a challenge from the start. How to use similar technology as Avatar, Mandalorian or Fortnite to produce live TV? Augmented Reality is used by many broadcasters to add graphic content or data, but this is the first time a hybrid 3D character acts in real time for multi cameras.

In the last months we have been involved on this project we have met thousands of people from all over the world that are fighting against the climatic chance. The immersive experience VR “Low carbone agriculture in Brazil” is based on the Rural Sustentável project and it has been developed together with the Inter-American Development Bank.

LOS40VR is a virtual reality App created to surprise fans of bands and lovers of music and virtual reality. For the first time viewers will be near their favorite musicians and will live exciting immersive experiences next to them.

In March, there have been two major events in Brazil and Argentina in which virtual reality has been protagonist, the World Water Forum and Annual of the assemblies of the IDB Governors meeting and the IIC.

The experiences of virtual reality that we have developed in the past two years along with the IDB they have had their space and it has been a success among the audience.

10 Tips for effective use of virtual reality in tourism

10 Tips for effective use of virtual reality in tourism It is the title of the workshop held in FITUR 2018. Segittur proposed us to summarize our experience in the creation of virtual reality for space FITUR Know-Export and tourism projects in ten tips.

In this article you will find some tips and ideas that you must assess before producing a virtual reality experience in the tourism sector.

FITUR, the tourism fair has smashed records in its 38th edition. This year 2018, more than 140,000 accredited and more than 10,000 companies from around the world have participated in the event par excellence of tourism in Spain.

Now that classes are empty and the students and teachers enjoy their holiday, we'd like to remember the day of virtual reality that we live with the students of the CEIP "Leopoldo Calvo Sotelo" in Madrid last week of course.

Travel to the of the Arctic circle in winter is a unique experience.

The unpredictable and ever-changing climate produces a wide variety of lighting conditions. It is the best time of year to photograph its incredible mountains and frozen lakes. But mostly it's the best time to catch the capricious and elusive Aurora Borealis.

Did you miss the presentation of VR Cervantes?

Do not worry…. Here are a summary of the day